Imagine a little classical string ensemble emerging from a tiny corner of South Africa’s biggest township and taking the world by storm! That is the success story of the Buskaid Soweto String Ensemble – affectionately known simply as ‘Buskaid’ by its supporters. 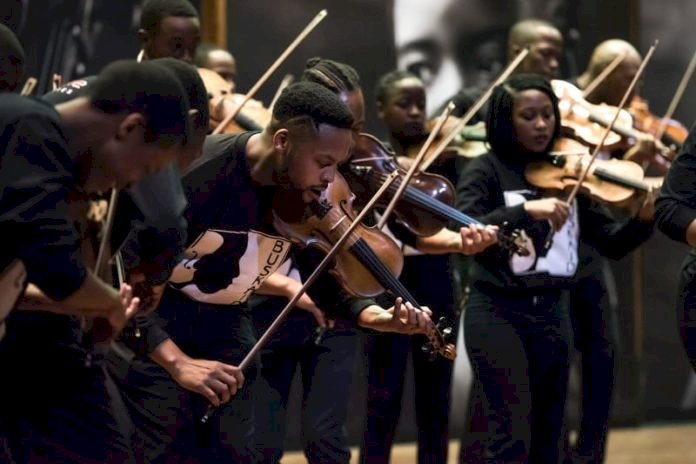 Buskaid, which is based in Diepkloof, Soweto has now entered its 22nd year. In that time, the Buskaid Ensemble has travelled the world 26 times to huge international acclaim. It’s the only South African orchestra to have played at the BBC Proms and was subsequently named as one of the world’s 10 most inspirational orchestras by the UK’s Gramophone Magazine.

Now Gauteng audiences have the chance to hear and see this remarkable group of highly talented young musicians, many of whom battle with difficult circumstances in their everyday lives. For Buskaid not only gives these young people a chance to develop their talent and access employment, but it also transforms their lives through the medium of music.

Join the Buskaid Ensemble at the Linder Auditorium on Sunday July 21st at 15:00h to hear the first movement of Mozart’s Eine Kleine Nachmusik, Zigeunerweisen (Gypsy Airs) by Pablo de Sarasate, featuring young Buskaid virtuoso violinist Mzwandile Twala, followed by the focal point of the afternoon – a very unusual performance of Vivaldi’s Four Seasons in which four different Buskaid solo violinists will be featured, two past members and two present.  Two current students, Khotso Langa and Mzwandile Twala will play Spring and Winter respectively, whilst Kabelo Motlhomi and Samson Diamond, both founder members, and both of whom have long since left Buskaid to forge highly successful musical careers, will play Summer and Autumn. The classical part of the programme ends with Mendelssohn’s String Symphony no 10, a sparkling, tuneful one-movement work which Mendelssohn wrote when he was about 13.

As always, the young Buskaid musicians will then embark on the lighter part of the programme, featuring an amazing line-up of Buskaid singers in some classic pop songs, and rounding off the afternoon with vibrant Kwela arrangements, unique to Buskaid.

Who:  THE BUSKAID SOWETO STRING ENSEMBLE

What: a unique mix of Classical, Classic Pop and Township music