Kalanga: A Tribe/Culture where the Bride Sleeps with her Father in-law on Wedding Night

In the Kalanga culture, men used to marry a lot of wives and in case the father died, the son would take over his surviving wives 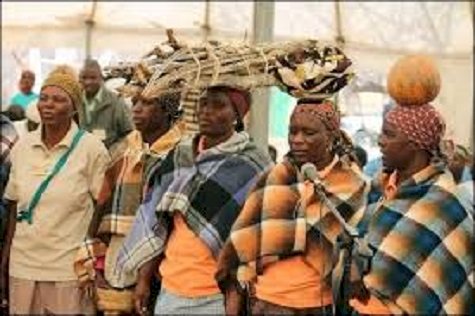 According to Huffman (2008), the original Bakalanga people descended from Leopards Kopje farmers. These people occupied areas covering parts of north eastern Botswana, western and southern Zimbabwe, adjacent parts of South Africa and Mozambique by around AD 100. They traded in ivory, furs and feathers with the Indian Ocean coast for goods such as glass beads and cotton clothes. The majority of these prehistoric Bakalanga villages have been discovered in Botswana and Zimbabwe in areas close to major rivers and were usually built on terraced hilltops with stone walls built around them.

The Kalanga, or BakaLanga, are a southern Bantu ethnic group mainly inhabiting Matabeleland in Zimbabwe, with smaller numbers in northeastern Botswana, Gaza Province in Mozambique, and Limpopo Province in South Africa.

What could be seen as a day of bliss for the groom on his wedding night is one fraught with grief and pain as the Kalanga tribe and culture demands that the father in-law have sex with the bride on the night of the wedding, it is alleged that the father-in-law should first ‘test’ his daughter-in-law’s virginity so as to be sure that she is a pure woman.

For the tribe of the Kalanga in Zimbabwe, marriage is complicated because this practice is popularly known in Kalanga as the n’holo we mwizana. This issue has been widely debated. Some Kalanga people have dismissed the practice as a myth which is meant to tarnish the image of their tribe, while others admit that this practice was cherished by their forefathers although it is no longer widely practiced.

One Kalanga woman, Siphiwe Nleya, said sexual indulgence between a father-in-law and his daughter-in-law was meant to solidify the relationship between the two.

“My parents used to tell us that long back, before the new bride formally got married to her husband, she would have sex with her father-in-law as a way of conducting a virginity test,” said Nleya.

She said the new bride was not supposed to refuse as it was part of the Kalanga “culture”.

Besides testing for virginity, the practice was important in strengthening the relationship between the father and son. Because of this practice, in most instances a woman’s first born did not belong to her husband but to her father-in-law since he would have been the first one to sleep with her and break her virginity,” said Nleya.

Reasons for the Culture long practice

A Kalanga traditionalist was interviewed and this was what he said “young men were not allowed to have sex with their wives until the head of their families officially "approved" them. There were no dissenters or protests usually. Kalangas claim they have practiced this tradition for centuries. "Among my people, sex between a father-in-law and daughter-in- law is an initiation act never to be ignored," he said. Besides being a way of welcoming a new bride into the households, the father-in-law is also believed to be more experienced in determining a bride's virginity. A Kalanga father presides over all domestic disputes and a daughter-in- law who had sex with him would "have absolutely no inhibitions when she reports matters concerning her sexuality" the cultural system was also meant to prepare the son to take over his father’s younger wives in case he died.

In the Kalanga culture, men used to marry a lot of wives and in case the father died, the son would take over his surviving wives

There had been fierce resistance as to the practice of this culture due to social awareness on its negative impact to modern society. There had been campaigns and drive by both government and NGOs on its many health harzards such as transmitting sexually transmitted infections (STIs), as well as HIV and Aids. There are many barbaric customs and traditions in Africa that needs to be jettison as most of them do not add value to humanity instead it degrades the valued human existence. Some violates women’s rights and so on. With this resistance Africa will rid itself of archaic customs and traditions that has hinder progress and development.

9 Creative Ways to Use Instagram Questions & Engage Your Followers