It is important to note that due to the significant calendar difference visitors and foreigners are advised to always make it clear when they are making appointments with locals on whether they are referring to local or European time. Modern-day Ethiopia still embraces its ancient calendar. However, travelers hardly experience any inconveniences because of the calendar difference. Most Ethiopians are aware of the Gregorian calendar and some even use both calendars interchangeably. 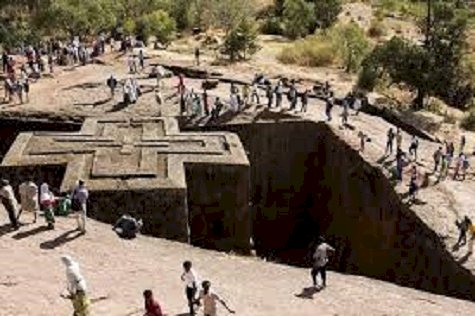 Ethiopia is one of the ancient and historic entity that is still existing today, unlike some ancient nations whose name have change to this present day times. The name Ethiopia has remain for this country fondly called the horn of Africa which its own calendar and for them it is still 2003 which began on September 11, 2010 of the Gregorian calendar. There is a 276 year difference between the Ethiopic and Coptic calendars.

Ethiopia, a country free of any colonial powers and influences of the Roman church, was not affected by the tides, and easily retained its original calendar, which claims that Jesus was born in 7 BC, and started counting days from that year on. Other calendars held that he was born in AD 1. The difference in the calendar that Ethiopia follows happened from this day forward, which is why the country’s calendar is seven to eight years behind.

It sounds like the ‘fables of Africa’ but its true travelling to Ethiopia is like taking a trip back in time. When you first set foot in the country, you can’t help but notice that Ethiopia has a calendar which is seven to eight years behind the rest of the world.

Based on the ancient Coptic calendar, the Ethiopian Calendar is seven to eight years behind the Gregorian calendar, owing to alternate calculations in determining the date of the annunciation of the birth of Jesus Christ. The Ethiopic calendar is closely associated with the rules and the different calculations influenced by the Coptic Church and the Ethiopian Orthodox Tewahido church.

The Ethiopians call the method used to calculate the calendar Bahere Hasab, or ‘sea of thoughts’. The calendar system starts with the idea that Adam and Eve lived in the Garden of Eden for seven years before they were expelled for their sins. After they repented, the Bible says that God promised to save them after 5,500 years. The Ethiopian and Gregorian calendars both use the birth date of Jesus Christ as a starting point for their calculations. The difference in the two calendars is because alternate calculations are used in determining this date. The Ethiopian Orthodox Church believes Jesus Christ was born in 7 BC, 5,500 years after God’s promise to Adam and Eve.

An Insight into the Gregorian and Ethiopian Calendar

The Gregorian calendar was created in 1582 by Pope Gregory XIII, who made some changes to the previously used Julian calendar. Several countries that were under the dominion of the Catholic Church had to accept the Gregorian calendar, which is named after the pope who first introduced it. At the time, many countries opposed the new system, which ordered them to drop 11 days from their Julian calendar. London residents took to the streets to protest the new calendar, holding banners that demanded, ‘give us back our 11 days’. The country refused to accept the Gregorian calendar until 1752; the Soviet Union was also a holdout until 1918, when it accepted the new calendar under the influence of its communist leaders, while Greece refused to switch until 1923.

The Ethiopian calendar consists of 13 months, where the first 12 months have 30 days each. The 13th month has 5 days in a common year and 6 days in a leap year.It is a solar calendar, based on the solar (tropical) year. The Ethiopian calendar's historical roots are the same calculations that lie behind today's Gregorian calendar and its predecessor, the Julian calendar. The last month, called Pagume, has five days, and six days in a leap year. In contrast, the Gregorian calendar has days that can be less or more than 30 days in a month. Some differences were the result of kings adding extra days on the months bearing their names in their honour in the Julian Calendar, such as July and August, which were named after Julius Caesar and Augustus and have 31 days each.

The New Year and the Leap Year

Ethiopia’s New Year (Enkutatash) means the “gift of jewels”. The Enkutatash tradition dates back to the time when the famous Queen of Sheba returned from her expensive jaunt to visit King Solomon in Jerusalem. Her chiefs are believed to have welcomed her by showering her with gifts of jewels or inku. But Enkutatash is not exclusively a religious holiday. The spring festival, which has been celebrated since early times, also symbolises the end of the rainy season accompanied by dancing and singing a cross the green countryside. It is also the season for exchanging formal New Year greetings and cards among the urban sophisticated as well as the traditional bouquet of flowers.

Pagume, the 13th month in the Ethiopian calendar, comes from the Greek word epagomene, which means ‘days forgotten when a year is calculated’. This month has five days or six days in a leap year. According to the Ethiopian calendar, a year has 365 days, six hours, two minutes and 24 seconds. Once every four years, the six hours add up to 24 hours and become the sixth day in a leap year. Once in 600 years, the two minutes and 24 seconds add up to a full day and form a seventh day, which the Ethiopians call rena mealt and rena lelit.

Leap years are needed to keep the calendar in alignment with Earth's revolutions around the Sun. It takes Earth approximately 365 days, 5 hours, 48 minutes, and 45 seconds (365.242189 days) to circle once around the Sun. This is called a tropical year (solar year) which is usually measured from one March equinox to the next.

Every 4 Years Is Too Often Like in the Julian calendar, a leap year in the Ethiopian calendar is added every 4 years, without exception. However, this is too often compared to the length of a solar year.

The Ethiopian Calendar’s four-year leap-year cycle is associated with the four evangelists of the Bible. The first year after an Ethiopian leap year is named the John year, and is followed by the Matthew year and then the Mark year. The year with the 6th epagomenal day is traditionally designated as the Luke year.

It is important to note that due to the significant calendar difference visitors and foreigners are advised to always make it clear when they are making appointments with locals on whether they are referring to local or European time.

Modern-day Ethiopia still embraces its ancient calendar. However, travelers hardly experience any inconveniences because of the calendar difference. Most Ethiopians are aware of the Gregorian calendar and some even use both calendars interchangeably.

As one of the few countries in the world with its own calendar system, Ethiopia celebrates important holidays on days that are different from the rest of the world. For instance, Ethiopia rings in the New Year on September 11, and not on January 1. The calendar offers foreign travelers the perfect excuse to hold two different celebrations for New Year’s and Christmas.