Morris Mbetsa, a 28-year-old Kenyan, surprised many with his ingenious invention, of Africa’s first flying taxi. He joined the exclusive club of renown aeronautical engineers with his giant leap to the sky, in 2018, when he came up with a drone big enough to fly passengers. 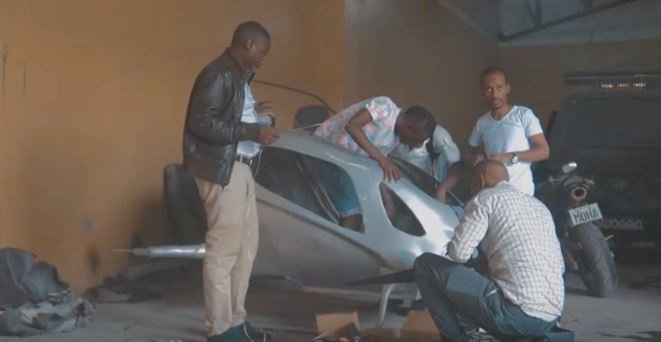 Mbetsa acknowledged that his interest in technology, started as far back as to when he was six years old, when he realized that he had a knack for technology.

my life. I never watched football while growing up. My room was full of electronics and wires,”

The innovative young man was so impatient when studying, that he dropped out of college to map out a road for his invention.

“I got impatient, I knew I had to wait for a lecturer to take me through many stages for the next six years. That was too long,” he divulged.

He greatly relied on the internet to gather enough knowledge and skills to actualise his dream of developing the continent’s first passenger drone.

Exposure and great training worked well to refine and redefine his skill.

“I went to the Notre Dame University in the US for aeronautical training and later on, undertook his internship at the IBM Innovation Forum in Boston,” he told the K24 Tv reporter.

He began his dream of flying taxis when he realized that the developed countries were not planning to share this innovation with Africa.

“This is where we (Africa) have the bad roads, constant floods, and having seen that they (developed nations) were not willing to share this with us, I took it up as a challenge and started working on this project,” he revealed.

The electrically powered drone can carry one passenger for up to 25 minutes at a speed of over 120 kilometres per hour with an elevation between 10 and 30 feet above the ground level.

“With this drone, you can easily fly from Nairobi CBD to Thika, you, however, need to be trained first and be certified to operate this drone, before you are allowed to fly it,” he stated.

More than one way has been designed to fly this impressive invention. One can manually fly it or control it using a remote control.

Mbetsa also affirmed that he, together with his team, were working on an air traffic control system, to enhance communication between all the flying taxis while on a flight.

Prior to this landmark invention, Mbetsa had managed to come up with a car security system, that used a mobile application to track cars in 2009.