The remake of THE LION KING claws its way into cinemas worldwide.

The remake of the LION KING surpasses my expectations with its dark theme and photorealistic images. The storyline carefully follows the original, the birth of Simba, the son of Mufasa, the king, and ruler of the Pride lands. 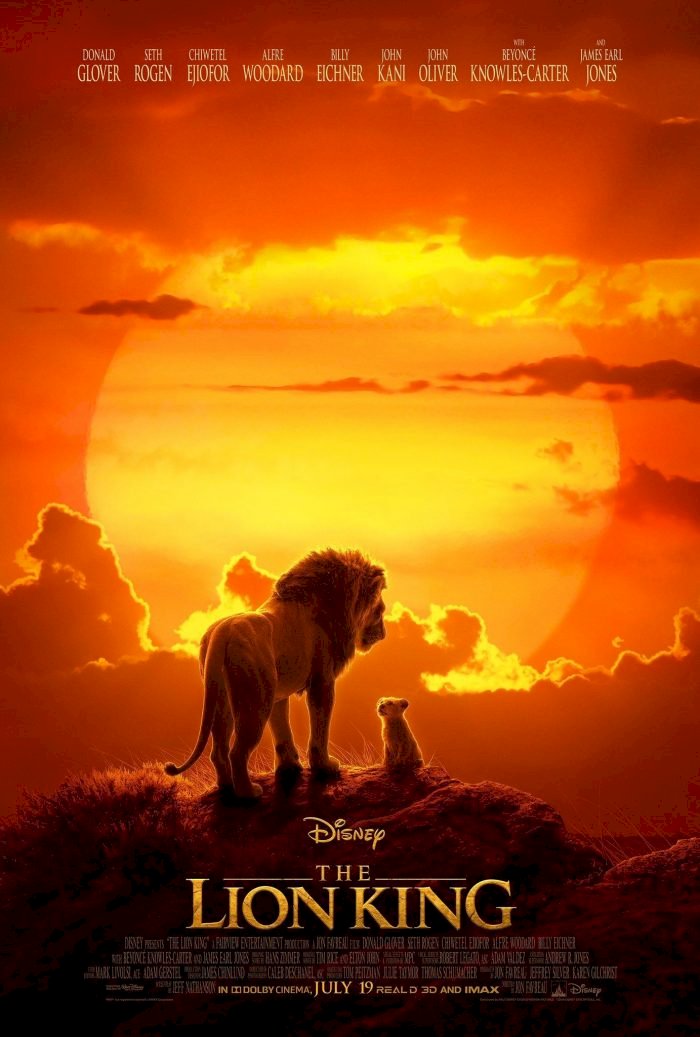 When I first heard about the remake of the LION KING, I felt it was so unnecessary. We've all seen a number of classics being ruined even with the best animation software, but because we all loved the first, we'll give the remake a chance to prove itself worthy.

Another thing that got me worried was the fact that the creators said it was going to be a 'Live-action' film which would, of course, require real animals acting out the story, unscripted. Then I thought to myself.. How in heaven's name is Disney going to achieve that? And then I saw the trailer and was absolutely blown away.. Even though it isn't really live-action.
A lot of reviews have criticized this film greatly, saying it lacked colour and all the fun stuff the first offered that got us dancing and singing along with baby Simba who couldn't wait to be king. Instead, we were slapped in the face with a dark version, completely ruining our childhood memories.

THE LION KING, an incredibly realistic remake of the 1994 film of the same title. Directed and produced by Jon Favreau, written by Jeff Nathanson, and brought to us by Walt Disney Studios. The movie has been nicked; The greatest VFX, CSI, visual effects spectacle since James Camron’s Avatar due to its realness of the animal movement and the lush green backdrops, with their flowing streams, swaying trees, and gushing waterfalls makes you think its a documentary from NatGeo's animal kingdom.

It is that real!

The storyline carefully follows the original, the birth of Simba, the son of Mufasa, the king, and ruler of the Pride lands. Simba is introduced to the pride lands, and shown the depths of it by his father, taught lessons in honour and legacy by his father. When Mufasa is eventually killed in a wildebeest stampede, the lion cub, Simba, is banished by his evil, treacherous uncle, Scar; who overruns the tribe together with the vicious hyenas. Young Simba is eventually raised by a group of jolly animals led by the pair of Timon and Pumba.

It is indeed, and in fact, a monument to Hollywood’s cinematic pile of legacies.
The film is visually stunning, outstandingly-magical, cinematically-darker than the original, very true to the original, but even better! The movie has a run time of 118 minutes and possesses sequences of compassion, courage, humility, perseverance, violence, peril, and some thematic elements that make you just want to shed a few tears and sigh.
The graphics quality was both mesmerizing and immensely captivating from the beginning to the end. Every single frame was a masterpiece, an absolute work of art. The animals were stunning—the details of their eyes, fur, facial expressions, and movements far surpassed my expectations but because it was tagged a live-action film, many expected a hundred percent realness but you just have to give it for these guys.

In the voice cast, Donald Glover plays Simba while Beyonce Knowles Carter as Nala, she does truly shine whenever we hear her sing, the chills we got from the ‘’Spirit’’ and ‘’Can you feel the love tonight’’ got us falling in love all over again as the nostalgia sets in. John Oliver does pretty amazingly with the hornbill Zazu. Scar’s evil character is played by the black American Nigeria Chitwetel Ejiofor, Seth Rogen and Billy Eichner had fun as warthog Pumbaa and meerkat Timon respectively, taking us back memory lane of the Hakuna Matata song. James Earl Jones lends us his voice once again as king of the jungle, Mufasa. John Kani plays the funny jungle priest, Rafiki. Playing young Simba is the amazing child star JD McCrary while young Nala is played by Shahadi Wright Joseph.
Indeed, a shot-for-shot remake of a universally beloved classic that is effective, and aims for top-notch realism, despite being inspired from a cartoon. The story is quite engaging, visually similar to the Jungle Book movie directed by Jon Favreau himself. However, some say since the studio was aiming at a realistic film, it would have been better not to have the animals speak at all. Animals don’t sing, not even like Beyonce. Perhaps it might have worked better without songs or dialogue or maybe not.

I think the movie was great. Besides, the aim of the film is to mimic reality and the darkness did it for me. The hyenas were changed from humorous to horror, that's that what hyenas are in reality. They stink, they are dangerous and not to be played with.

People fail to see that THE LION KING, The circle of life isn't just for kids but adults alike, unlike the first which targeted children and the young at heart.

Artificial Intelligence - The Challenges and Benefits To The African Continent...