Russia has never had an African colony. It stayed out of the scramble for Africa, only engaging with African states in the 19th Century. In 1869, for instance, the Russians gave Ethiopia military support to threaten the position of the British in their quest to control the Suez Canal. They did this because Britain was one of their main European rivals. 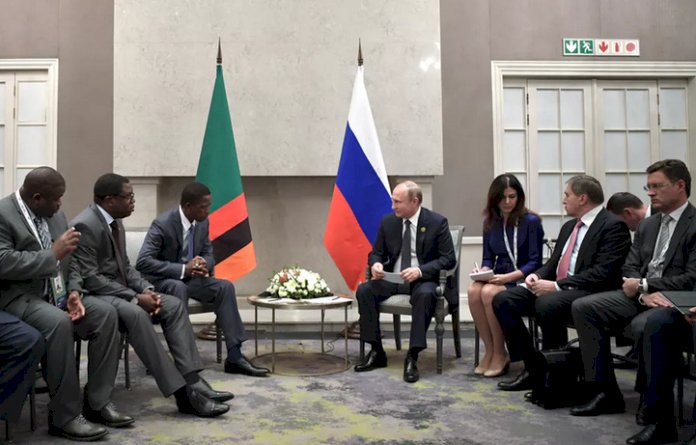 It wasn’t until the Cold War started in 1947 that Russia began to develop diplomatic relations with several African countries. This was a way to counter the influence of its rivals such as the US.

The Cold War dictated the former USSR’s relations with many African countries for decades. This was followed by a period of relative inactivity. But more recently, relations have become increasingly important for Russia as well as some African countries.

The result is that some African countries no longer need to choose between the American and the Chinese way of development.

Ostensibly, China has the most pragmatic engagement with Africa. Its policy is not to interfere with the internal workings of nation states or play geopolitics by pitting countries against each other. But it has become increasingly difficult for the country to resist using its military power to protect its economic interests.

For its part, the US’s ultimate aim is to tip the regional balance of power in its favour while also gaining access to Africa’s resources.

My research explores Russia’s current relationship with the continent. The research examines Russian President Vladimir Putin’s strategy to redress the global balance of power by countering America’s influence in Africa and trying to match China’s large economic footprint on the continent.

I conclude that Russia’s primary goal is political influence. This is achieved by gaining control of natural resources and providing military support and intelligence. Yet, despite making massive inroads, the Russian Federation is still less influential than the US and China on the continent.

Russia began to trade and interact with these states routinely. It sent in military intelligence officers to establish a strong presence and ensure that Africa was not purely influenced by the West. The Russians developed relations with Africa so intensely that for the 10 years between 1950 and 1960 it surpassed the influence of colonising powers.

That influence would remain more or less intact until the Boris Yeltsin era. Between 1990 and 1999 Russia’s impact on the continent was spectacularly lowered. Nine embassies and three consulates were closed. The number of personnel subordinated to the Russian Ministry of Foreign Affairs was drastically reduced. Russian cultural institutions were closed, and economic relations were unilaterally terminated. Previously generous aid programmes were scrapped.

This all changed when Putin came to power in 1999. Under his leadership Russia has started to regain its economic and political clout in Africa. Putin has jumpstarted Russia’s diplomatic, economic, and military ties with its former African allies.

From my research I can conclude that Russia’s primary intent is to build political alliancesby supporting nation states economically and militarily while remaining non-judgemental about their internal governance structures.

Its long-term goal is to become a political, economic and military mediator that can stand behind Africa’s global interests and count on the continent’s support in return. Here are some of the areas where Russia are mainly active:

Economic interests: Russia is now seeking to exploit conventional gas and oil fields in Africa and elsewhere. Part of its long term energy strategy is to use Russian companies to create new streams of energy supply. For example, Russian companies have made significant investments in Algeria’s oil and gas industries. They have also invested in Libya, Nigeria, Ghana, Ivory Coast and Egypt.

Russia is also expanding its African interests in minerals. Uranium – which is key to the nuclear power industry – is at the top of its list.

In addition, Russian companies are producing aluminium in Nigeria, and have constructed hydropower stations in Angola, Namibia, Botswana.

Russia is also on track to build nuclear plants in Egypt, Nigeria and Algeria. These investments are a means to becoming an integral part of Africa’s energy sector.

Russia has also improved its commercial relations with its African partners. In 2009, it established the Coordinating Committee for Economic Cooperation with sub-Saharan Africa to assist in promoting Russian business interests.

Aid: Under Putin Russia has made sizeable aid donations to a variety of African countries averaging about $400 million per year. Around 60% of Russian aid is delivered through international organisations; global humanitarian organisations like the World Food Programme and the UN refugee agency. The remaining 40% gets to Africa in a framework of bilateral cooperation. It also makes donations to support education, health care, agriculture, environment and energy.

The danger for Moscow is that, the more progress it makes with African governments, the more likely it is that its interests will collide with those of either China or the US – or both.