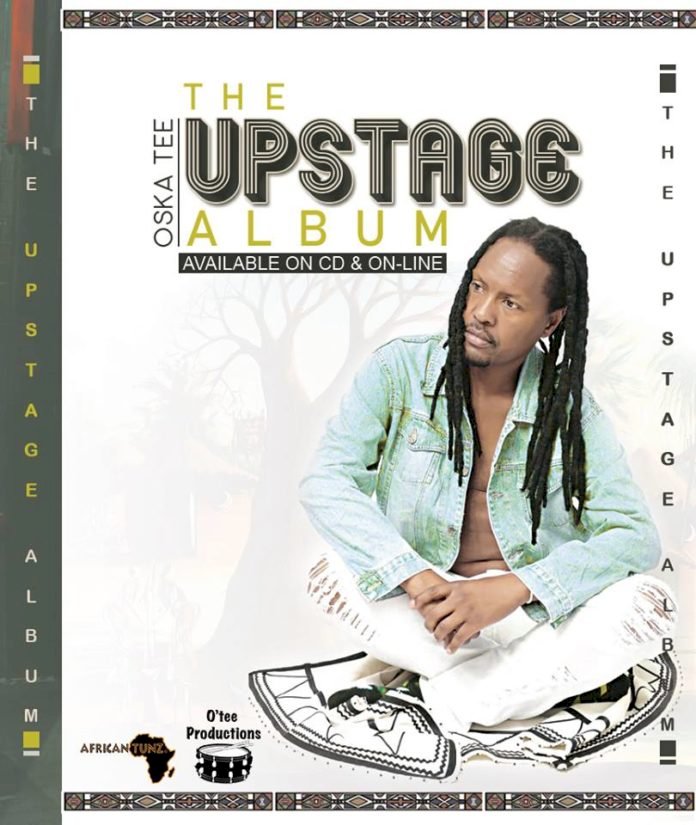 This is Oska Tee’s fourth studio album. It is a follow up to his previous albums, The Ultimate album 2005; The Unique album 2008 and The Utmost album 2010. Oska Tee brings 15 fresh tracks through his new album ‘The Upstage album’.

Oska Tee, born Batandwa Oscar Tyumre in Mthatha in the Eastern Cape, started singing at an early age at home, school and in church like most musicians. He has been in the music industry for almost 30 years and has worked alongside many big names in the music industry including one of Africa’s biggest music icons Brenda Fassie with whom he did over 100 shows within one year as a road-show manager in 1998 – 99. Oska also worked alongside other big names like Patricia Majalisa, whom she managed for eight years and wrote four songs in her album Epatini in 2010. Oska also managed By4 and did backing vocals for popular groups Splash, Dalom Kids, Nomuntu Kappa, Suthukazi Arosi and Mercy Pakela, to name but a few.

The Upstage Album as Oska Tee puts it, ‘celebrates my life and times in the music industry so far and I have brought back and featured some of the superstars that I have worked with or admired over the last 25 years in music’. This includes Nomuntu Kappa (former lead singer of Chimora) who features in a song titled ‘Hero’, Patricia Majalisa who features in a song ‘I heard them’, Nelly Booi who features in a house track ‘Somagwaza’, Nani Ntengo of Platform one, who features in a song Ntwazifani, Vuyelwa the Tsonga disco diva who features in a song Black on black and By4 who feature in the song ‘Superstar’. Also featured is Ludwe Maki, Brenda Fassie’s EX-dancer/back-up singer on Ntwazifani and kwaito singer Tsiki Dee on rhumba piece DANCE. As part of social responsibility Oska Tee took a young boy Tinde from his home town Mthatha to come and feature in one of the songs, a kwaito tune ‘jayv’eduze, produced by Dj Curlz Deep, Oska Tee’s young cousin. Songs in the album are in isiXhosa, isiZulu, Xitsonga, Setswana, English and Shona.

All the songs have been written, arranged and composed by Oska Tee and are produced by Oska Tee and various experienced producers from within South Africa’s music industry, including Harold Loftazz Khoza, Tando Zinto, Mpho Majiga, Dj Curlz Deep and Dj Noza.

From the 15 tracks on the Upstage album each song is different and unique but hardcore and proudly South African.

The album has been released by Africantunz in the UK and O’Tee productions in SA in December 2018. It is available on iTunes, amazon, google-play, deezer, symphy@Africa, MTN music, and selected shops & Cd stalls around the country and neighboring countries.

Oska Tee continues to tour with the likes of Patricia Majalisa, By4 and others as a performer in SA, Zimbabwe, Botswana and Namibia. He intends to organize gigs and a tour with all featured artists in all the South African provinces. He performs with a live band.

Daily sun published a story on 18 January 2019 about Oska Tee and the upstage album. Oska Tee has done radio interviews on UCR fm, Tru fm and New vision fm. More than 300 radio stations worldwide have been sampled with the music. UK based Kenyan radio, Continental radio station, profiled Oska Tee for weeks on their website. Centraal fm in Netherlands is one of the European stations where The upstage album gets air-play. The upstage album was reviewed on UK world music magazine SONGLINES on 9th May 2019. Kenyan Denisia Music TV loaded Oska Tee’s music video on their YouTube channel. Oska Tee has a team of DJs countrywide who are pushing the songs for him in night clubs, bars and events.

As a way of giving back, he mentors, grooms and helps young up & coming artists through Abazi productions, an independent record label that he works for as a manager. When not on tours or rehearsals he’s in Abazi recording studio or office on a daily basis.

Interview: Dr Natalia Kanem – Gender Equality is about fighting for the...