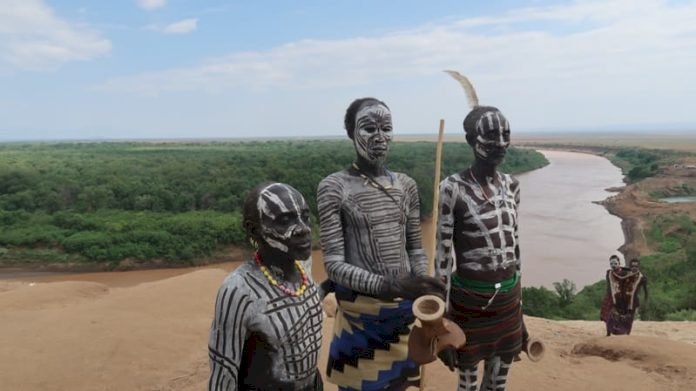 Africa is blessed with native tribes that successfully resisted influence from the Western world. These tribes capture the Spirit of Africa and act as landmarks of Africa’s unique cultural heritage.

In no particular order, meet some of the famous tribes from Africa. If you are a tourist looking for what to do while in Africa, be sure to meet with any of these tribes to experience the Spirit of Africa.

Ubuntu, the language of the Zulu people means togetherness and a sense of unity. It is one of the hallmarks of the tribe. Zulu is easily the most popular tribe in Africa and also one of the largest ethnic groups in South Africa.

The Zulu people see themselves as the “People of Heaven.” The tribe has an estimated eleven million people in the tribe, and they stand for union and togetherness.

The Zulu is a modern tribe that embraces cultural practices. Men wear colorful wrappers while the women wear beautiful beaded works. Zulu is the birth tribe of one of Africa’s most famous chiefs Shaka Zulu and they are usually from a place called Kwuzulu-Natal.

This ethnic group resides in the Southern Ethiopia and is one of the Omo Valley tribes you can visit. The Lower Omo Valley is home to a rich array of tribes such as the Mursi who pride themselves in their cultural practices such as Thangine which is a bloody duel between men.

However, the Karo people really stand out. With an estimated population of about 2,000, their smaller size makes the preservation of their culture fascinating. They are masters of body art and body painting, a practice which has given the group it’s easily identifiable face.

They paint their bodies with a combination of white chalk, yellow, mineral rock, iron ore and charcoal. They often practice ritual scarification, choosing scars as an easy way to identify themselves.

Women choose beautiful scars to adorn their back or chest while men proudly wear scars as symbols of acts of bravery.

The most identifiable feature of the semi-nomadic and pastoral tribe of the Himba people is the bright red coloring of their skin. The coloring is a result of a mixture of Red Ochre, animal fat and butter. The Himba lives in the harsh desert climate so the mixture, typically called “Ojitze”, serves as a form of sun protection though it is primarily for aesthetics.

It is typical for the Himba women to be responsible for the day to day running of the homestead and the men are expected to carry out legal and political activities. They are approximately 50,000 people in this tribe. They usually wear a soft leather loincloth and believe in a god called ‘Mukuru’ whom they communicate by lighting a flame called ‘Okuruwo’.

The Dogon people are one of the most fascinating tribes in Africa. Descendants of ancient Egyptians, the Dogon people have extensive knowledge of astronomy and abstract concepts like spaceships. They have recordings of gods who came from the stars.

Dating as far back as 3200 BC, the Dogon had already recorded evidence of Sirius, the brightest star and its three separate star systems even though Sirius B was invisible to the naked eye.

They also have multiple rituals that have been preserved over time like masked dances, art, wooden sculptures and architecture. Like the Egyptians, they believe their gods came from the stars. At this moment there are still about 800,000 Dogon people.

The Yoruba is one of the largest ethnic groups in Nigeria. They have a rich history and a rich cultural heritage tracing far back to the old Oyo Empire.

What is curious about the Yoruba culture is the widespread nature of it, it has transcended the borders of Nigeria to countries like USA and the Caribbean with each Yoruba sub-ethnic group having its own unique interpretation of history. They also have a higher birth rate of twins than any other ethnic group in the world.

The Masai, Kenya and Tanzania

The Masai are easily one of the most distinguishable tribes in Africa. One of the most notable things about them is although they are close to ‘modern civilization’, they have resisted all attempts to be integrated into society.

They have instead adhered strictly to their way of life for years now. The Masai tribe are tourist attractions to millions of people every year. They are a tribe of warriors who trace their origins from a migration from Sudan to Kenya and Tanzania along the Great Rift Valley.

The tribe is nomadic in nature, choosing to stay in smaller homesteads. They build their way of life around their cattle which they insist are a gift from their god Ngai. They use the cattle primarily as a measurement of wealth as well as a source of food, even going as far as drinking the blood of the cattle for sustenance.

The Taureg of the Sahara

The Taureg are nomadic in nature and as such can’t be classified  strictly as living in one specific country because they typically migrate between Niger, Mali, Libya and Algeria. Like most nomadic tribes, their movement depends on their livestock, for them typically camels, goats and cattle.

The Taureg is an old tribe. Although fluent in Hausa and Arabic, they prefer to speak Tamasheq as their main language.

This dialect traces its roots back to the Berber language, one of the oldest languages in the world. They are typically an Islamic society with different cultural influences; for instance once a Taureg man reaches the age of 25, he is required to wear a veil.

This ceremony is done by a religious official called the marabout who wraps the veil around the man’s head.

The Wodaabe, Niger and Chad

They are best known for their traditional festival Gerewol. It is a festival for men looking for prospects in marriage. The men gives a whole new meaning to the concept of dressed to impress, wearing carefully crafted pieces and performing intricate dance moves of such large spectacle to female judges.

They then choose the men they find the most attractive amongst the performers. Wodaabe actually translates to “People of the Taboo”, a name that probably stems from the fact that the Wodaabe broke off from the bigger Fulani tribe. Their local language is called “Fula”.

It is no secret that the continent of Africa has had its own share of civil war and unrest leaving multiple displaced persons without homes. Usually the term pygmy is derogatory for the pygmies of central Africa.

This tribe typically lives in the rainforest of Africa, leaving war torn homes to find solace and peace in the jungle. This tribe isn’t just one ethnic group, rather it is a composite of multiple ethnic groups; Aka (Central African Republic), Baku (Southern Cameroon), Twa (Rwanda) and Mbuli (Democratic Republic of Congo.)

The tribe has more than 170,000 people in the forests. Together, they are a cohesive group who see the forest as not only a place to build a new home but also a place of worship.

What do you think of our list of famous tribes of Africa? Which is your favourite and why? We would love to hear it in the comment section below.