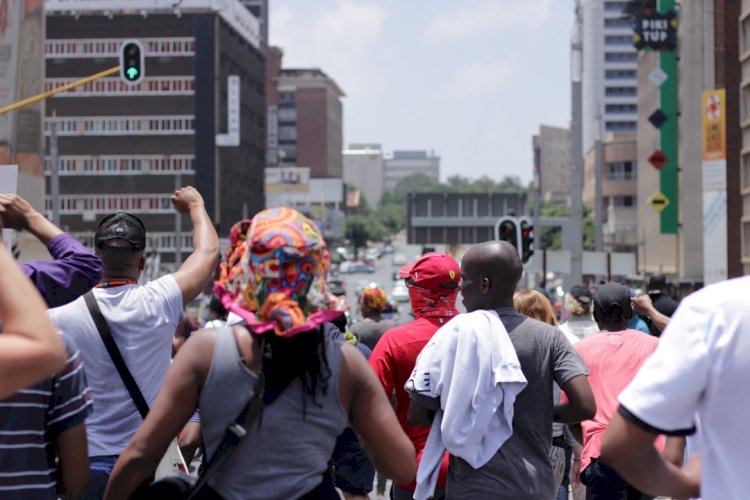 "We are a country that is completely committed against xenophobia," President Cyril Ramaphosa said in a video statement published on Twitter Tuesday. "We do not allow and cannot tolerate attacks on people from other African countries."

Police fanned out across neighborhoods in Johannesburg and Pretoria as the violence extended into the third day in South Africa.

Police have arrested more than 100 people in five areas impacted by the violence. Many gutted, emptied shops remained closed as shop owners, many of them foreign, feared to return to their property.

Police minister Bheki Cele confirmed on Tuesday that five people had died since the violence started on Sunday night.

"There is no justification whatsoever for people who have a sense that their jobs are being taken by people from foreign lands to attack them, to destroy properties, and actually to kill them," said Ramaphosa. "This must be stopped."

In Alexandra, a township in Johannesburg which was in lockdown on Tuesday after a spate of attacks in the morning, some foreigners had returned to their shops to assess the damage.

Abdullahi Duale, a Somali shop-owner whose store was looted in the early hours of the morning, said this was not the first time his business had been looted.

"The last time they took everything in the shop, and now they repeated it," said Duale. "We are always afraid that it can start anytime."

Others whose shops had survived the night were packing their belongings and leaving the area by morning.

Gauteng Premier David Makhura visited Alexandra with police officials and called for calm, pleading with the community to refrain from the violence.

Makhura said police had the capacity to deal with the unrest and would not need any reinforcement from the army, a concern that has emerged in recent days. In July, the government deployed armed soldiers to assist police in controlling gang-related violence in Cape Town.

The government would only consider calling on the army in Gauteng if the police said they were not able to diffuse the situation, he said.

"The job of the police is to police, and we know that the job of the army that is a very different job altogether. The army comes in to shoot down at the enemy," said Makhura. "So far the police are doing well."

The Ethiopian Embassy in South Africa advised citizens to close their shops "until peace is restored", according to Ethiopian media, and Zambia's Ministry of Transport and Communications warned Zambian truck drivers not to travel in to the country.

Nigerian President Muhammadu Buhari said he has dispatched a Special Envoy to South Africa to convey his concerns to President Ramaphosa.

Buhari's office said he had has also instructed the Minister of Foreign Affairs, Geoffrey Onyeama, to summon the South African High Commissioner to Nigeria and get a brief on the situation; express Nigeria's displeasure over the treatment of its citizens and to get assurances of the safety of their lives and property.

Onyeama called the violence "sickening" on Twitter on Monday.