The Niger river has one of the most unusual routes of any of the major rivers in the world. It is said to be unusual because the river rises not far from the Atlantic Ocean, about 240 km, and instead of flowing to the nearby Atlantic Ocean, it takes a northeasterly course toward the Sahara Desert, before turning southeast to eventually discharge to the Atlantic in Nigeria. 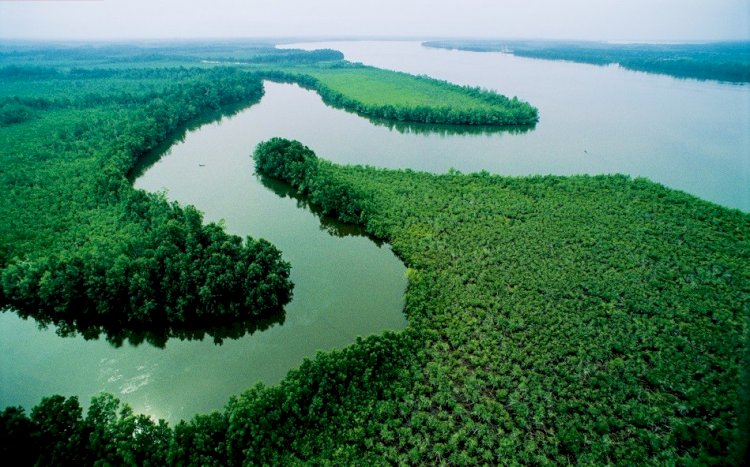 The Niger River is located on the western part of the continent of Africa. The River flows across five countries namely Guinea, Mali, Niger, Benin, and Nigeria before emptying into the Atlantic Ocean. Across these countries, the River is called by different names such as Jeliba, Orimiri, Isa Ber, Egerew, and Kwara all interpreted to mean the massive river.

In 1788, the British formed an association whose task was to explore Africa and of importance the source of the Niger River and other African rivers. The expedition took a while until 1796 when a Scottish named Mungo Park discovered part of the river.

However, it was not until October 1946 when French explorers made a journey along the Niger River and were able to document the source and the course. Their journey ended in March 1947 at the point where the river joins the Atlantic Ocean. Helge Hjelland of Norway also went up the river to the source at the Guinea Highlands then along the river to the mouth

The Niger river has one of the most unusual routes of any of the major rivers in the world. It is said to be unusual because the river rises not far from the Atlantic Ocean, about 240 km, and instead of flowing to the nearby Atlantic Ocean, it takes a northeasterly course toward the Sahara Desert, before turning southeast to eventually discharge to the Atlantic in Nigeria. This strange geography apparently came about because the Niger River is two ancient rivers joined together. The upper Niger, from the source west of Timbuktu to the bend in the current river near Timbuktu, once emptied into a now dry lake to the northeast of Timbuktu, while the lower Niger started to the south of Timbuktu and flowed south into the Gulf of Guinea. Over time upstream erosion by the lower Niger resulted in stream capture of the upper Niger by the lower Niger.

Source of the Niger River

The river flows from the Guinea Highlands located in southeastern Guinea. Its major tributary is the Benue River which is itself 1400 km long. The Niger discharges into the Atlantic Ocean at an area known as the Gulf of Guinea. Other ones include the Sirba river, Tinkisso River, Milo River, Niandan River, Sankarani River, Bani River, Mekrou River, Sokoto River, Kaduna River, Benue River, Forcados River, and the Nun River.

The Niger River is 2597 miles long. Making it the longest in West Africa, third longest in Africa (with only the Nile and Congo Rivers longer), and fourteenth longest in the world.

Though there was initial confusion on the source, current evidence of the source of Niger River is documented as the Guinea Ranges. The exact point where the river originates is in the highlands near the Sierra Leone boundary at 2,500 feet (750 meters) above the sea level. The source is only 200 miles (320 kilometers) north of the Atlantic Ocean. The highlands extend to three more countries namely Sierra Leone, Liberia, and Ivory Coast. Other than the Niger River, the highlands are a source of 22 other rivers including Gambia and Senegal. The Guinea Highlands is covered by dense forest with main trees being ebony, mahogany and the teak with the lower land being savannah grassland. The area receives high rainfall making it wet all year round therefore making the Niger an all season river.

The Guinea Highlands are at an average of 500 meters (1640 feet) above the sea level though there are some high peaks like the Bintumani Mountain in Sierra Leone which is at 6,381 feet (1,945 meters) in elevation. Other high points along the guinea highlands are the Nimba Mountains at 5,748 feet (1,752 meters) high and mount Sankan Biriwa at 6070 feet (1,850 feet) elevation. The river grows bigger downwards due to various tributaries such as the Sankarani, Bagoe, and Milo.

Significance and economic value of the Niger River

The river is very significant to the extent of two countries namely Niger and Nigeria obtaining their name from the river. Various organizations have invested heavily in the river because of its significance to the people and animals. These organizations include the Niger Basin Authority, OPEC, Islamic Development Bank, and African Development Bank.

The rainfall and hydrological conditions in Guinea make it possible to exploit, with good chances of success for an annual rainfed crop, the alluvial plains of the Niger River and its tributaries. However, to be able to cultivate all year round, irrigation is necessary. The irrigation potential in this region is estimated at 185000 ha, of which 100000 ha are relatively easy to develop, though the construction of dams is necessary for the storage of the water [116]. To date only about 6000 ha of rice are irrigated.

The irrigation potential for the whole of Côte d'Ivoire has been evaluated at 475000 ha, without giving details of location. It is estimated that 50000 ha are located in the Niger basin

In Mali there are four climate zones in the basin area and rainfall ranges from 1500 mm in the south to less than 50 mm in the north.

The water in the Niger River is partially regulated through dams. The Sélingué dam on the Sankarani River is mainly used for hydropower, but also permits the irrigation of about 60000 ha under double cropping. Two diversion dams, one at Sotuba just downstream of Bamako, and one at Markala, just downstream of Ségou, are used to irrigate the area of the Office du Niger (equipped area of about 54000 ha). However, double cropping in this area would only be possible if the Fomi Dam, planned on the Niandan river in Guinea, were constructed to provide a supplementary and regular amount of water. However, the negative effects on the environment that would be caused by the construction of this dam seem to be important.

Several irrigation projects have been identified, especially related to the construction of the Tala and Djenné Dams on the Bani River and the Dam at Tossaye on the Niger River. However, the drying up of several watercourses during the low-flow period in the dry years 1983-85 requires a careful re-examination of the projects identified, with the recent hydrological figures being taken into consideration .

In Burkina Faso most of the irrigation is located outside the Niger basin. About 850 ha are irrigated in the Niger basin and the potential is estimated at about 5000 ha .

In Benin the irrigation potential has been evaluated at 300000 ha for the whole country, but no details about location are given . In the present study it has been estimated at 100000 ha in the Niger basin . The actual equipped area here is 1090 ha, of which 740 ha are cultivated.

The Niger River crosses the south-western part of Niger over a distance of about 550 hen with the final 150 km forming the border between Niger and Benin. There are no important tributaries in Niger, but there are two fossil valleys, the Dallols, where there is no permanent flow but where the water resources are quite important. Three other zones are considered as being part of the Niger basin, although in tact they are rather valleys or depressions at a considerable distance from the Niger River with no streams reaching the Niger River: the Ader-Doutchi-Maggia (ADM) valley, the Goulbis valley and the Agadez region.

Irrigation of the 140000 ha in the Niger River valley and its tributaries on the right side would only be possible through the construction of the Kandadji Dam in the north, just downstream of the border with Mali. Without this dam it would be possible to irrigate only 15000 ha. However, construction of this multi-purpose dam has so far not been possible due to financial and economic constraints. Reports also indicate that the dam would have a negative impact on the environment . Several other storage works on the tributaries are under consideration.