A look at the popular Oro tradition of the Yoruba's, it's meaning, significance and implications. 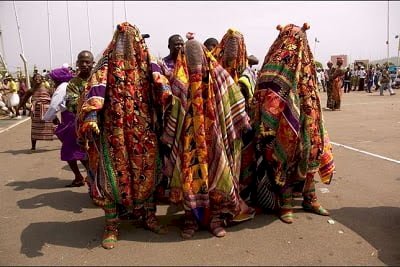 The Oro Festival is a festival celebrated in most South Western States in Nigeria by the Yorubas. It is an event celebrated by towns as well as settlements of Yoruba origin. It is a traditional festival that is of patriarchal nature, as festivities are carried out only by males who are paternal natives to the specific locations where the particular "oro" takes place. During the festival, females and non natives stay indoors as history has it that it is forbidden for Oro to be seen by women and non indigenes. According to traditionalists and adherents the ceremonies surrounding the celebration of Oro is different by town, and an oro is peculiarly called after the passing  of a monarch.

Festivities lasts for several days and throughout that duration, women and other non indigenes/ participants are expected to stay indoors. There are various aspects to the event. According to chief Labra Bashorun the Osorun of Tomaro Land “Yorubas nowadays may be practising Christians or Muslims, but there are still shrines to the old gods scattered around the countryside, and traditional festivals  like the festival of the Oro cult are still celebrated and still taken extremely seriously. As in many parts of West Africa that practise this type of cult, women and outsiders are forbidden to look at the masked figures,” he said. Also it was known that by tradition, the Yoruba leaders in various towns where this tradition is practised ask people not connected with the event such as women and outsiders to stay at home when the oro masquerade parades through the streets at night. As It is an age old Yoruba traditional belief that the Oro must never be seen by women and an outsider.

As stated earlier the death of a monarch or king is accompanied by the oro festival. Like most traditional African communities, towns and villages in Southwest Nigeria have kings called the Oba. Despite westernisation, the role of the Oba is still revered in Nigeria, although they have no constitutional roles. When the Oba dies, a special atonement and period of mourning are held. Part of the latter, according to popular opinion, involves human sacrifice. However, Oro faithful vehemently deny such claims of sacrifice, dismissing it as mere heresay. Apart from that, Oro does not come to town unless it is its celebration. According to sources during the festival, Oro makes itself known by a whirring, roaring sound which can be heard by all. This whirring sound is alledgedly done by his wife, Majowu. It is said that Oro is clothed in a robe with shells and wears a white wooden mask with blood smeared on the lips. It passes alongside its followers. Its followers announce their presence by chanting incantations in praise to the oro in very loud voices. The "bullroarer" is the sacred instrument used to invite Oro and announce his coming. History has it that women who see Oro face to face do not survive. This is because they are visited by painful death.

However, it is claimed by oro enthusiasts that the main aim of the Oro festival is to maintain peace and order and cleanse the society. Regardless of such noble claims, the oro festival, because of its much publicised controversial nature and supposed infringement on freedom of movement has been a subject of much discuss and apparently litigations.

Interestingly In 1999, the late Dr. Frederick Faseun, then leader of the Yoruba Oodua People’s Congress, OPC, stated before his death, when there was a clash between Hausas and Yorubas in Sagamu: “You know that the traditional Oro festival was going on when a woman, a guest among the Yoruba, violated the tenets of the festival. When the festival is on, no woman of any nationality should behold the Oro, be such woman an Italian, English, American, South African or Yoruba; no woman should behold Oro with naked eyes. The penalty for such violation is death, no matter who the woman is.”

Sometime ago in 1999, there was a clash between Yorubas and Hausas in South West Nigeria over the killing of some Hausa women who were apparently outside of their home at night during the Oro festival. According to the former famed TempoLife magazine report, - “it was the failure to respect the hours of worship or to restrict the fetish to the sacred grooves that led to the clash between a section of the Hausa community and Oro cultists in Sagamu. In a chat with a traditional healer in Abeokuta, Ogun State, Taiwo Oloyede, the Sagamu tragedy could not have been the handiwork of serious Oro people since the Hausa woman allegedly killed by Oro people did not vanish and her body was found ‘a ki  nri ajeku oro’ (you can’t find the remains of oro victim), If it were real Oro people, her body would not have been found. It was a mere case of murder. If the woman had seen Oro that has the magical powers, she would have died a natural death without anybody touching her". he said. The alleged death of non members who see the oro or are caught by its followers is where the oro cult comes under heavy scrutiny and severe criticism. Christian and Muslim faithfuls see it as a fetish abominable system from which true “believers” must desist from. But still, even among the religious faithful, opinions are somewhat divided.

Shuaibu Yekeen, a Muslim cleric in Lagos who sends his sons home to get initiated each time they come of age, said all is just for fun. More importantly, he claimed, before sending his first son, he had sought God’s advice on the compatibility of Oro with Islam and "Allah" (the Muslim God) had given him the go ahead.

In like fashion, Engineer Taye Ajibola, a devout Muslim living in Niger Republic noted," whenever it is time to celebrate the Oro in Yewa land, he comes back home to take part". He further argued that "Oro is not a pagan practice but a way of gathering the members of the community and giving them a sense of purpose" . On the killing of women caught by the Oro?,  Ajibola, who as a child, used to stay away from Oro festivals said: “A game must be played according to its rules.”

According to an AFP report, over 66 people were reported dead after the Oro faithful clashed with the Hausa speaking tribe. Oro faithful had carried out their activities in the Hausa dominated area and killed a woman who had gone against their code. It is said Oro faithful had passed the Hausa dominated area for the first time in 9 years when they saw a Hausa woman outside, In accordance with their rules, the woman was allegedly killed. The resultant crises led to the death of many more people.

Oro’s implication, according to legend, is to ward off evil in the community and, at same time, entertain its people. It is said the followers act as vigilante whenever they are out to perform. So, acts such as stealing and robbery are prevented, at least, in the traditional setting. Also, the Ifa oracle is consulted and the necessary sacrifices are made. They believe, these practices can help to ensure peace.

The oro festival has divided opinion and various discussions has risen from all the controversies surrounding its practice, whatever way we choose to look at it, fetish or entertainment, tradition or cleansing, it is a practise the adherents hold dearly to this day and believe in it's efficacy whether good or bad.