The Sacred Monitor Lizards Of The Orogun People

The reverence and "touch not' status of the Monitor Lizard in Orogun Delta State Nigeria. Tradition, they say is part of the culture of a people and it affects the way they live, interact, marry and bury their dead. And tradition as we know it dies hard; most people find it very difficult to abandon their tradition even if they are confronted with new facts and technology in the modern day. 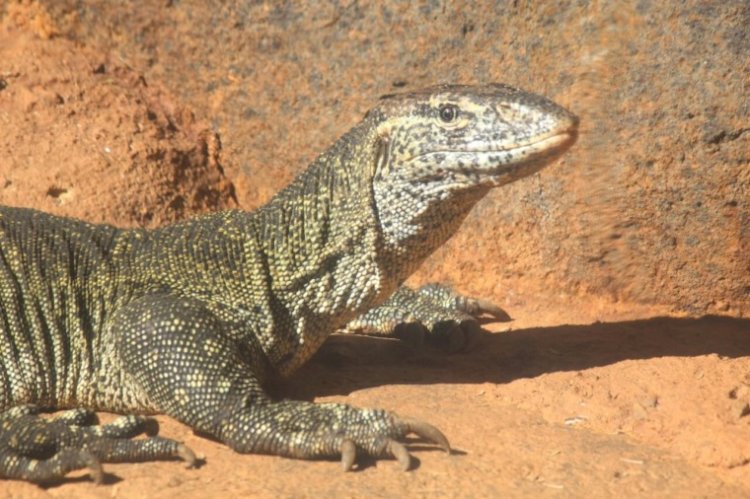 The Orogun people are a very good example of such a people, who cling religiously to their old way of life and beliefs; they believe that the monitor lizard has extra-ordinary and potent powers. Hence they worship it and, forbid any indigene from eating it, no matter the circumstances. The reason is they believe that the monitor lizard saved them during past communal wars with other warring tribes, and also in the present time saves them from any form of danger. The orogun people are indigenous people of Delta state Nigeria.

And it's not just the Oroguns but some parts of southern Ijaw in Bayelsa as well, forbid their people from eating monitors, as well as dogs, but the monitor stands out, as it's a rarity. Why do they revere these animals so much and tag them untouchable?

Well the story boils down to an event of times past as told by the Secretary to HRH Efeurhobo Eyefia I, Okpara-Uku of Orogun Kingdom, Prince Orogun Wanogho.

“These animals, you see, we adore them from time immemorial, most especially the monitor lizard. Any son or daughter of Orogun Kingdom does not eat the monitor lizard and dog, because Orogun as a male who got married to a woman called Orhiara and Orhiara was one of the female children of Owhowha. Continuing, he said, “One day, Orhiara went to the farm and during work at the farm, she was tasty and went to fetch water and she saw a group of monitors at the stream, moving over each other,  she was amazed and went back home to report to her husband about what she saw. The husband Orogun followed her to the scene to see for himself, adding that a voice came from the monitor saying, the animal you see is a sacred animal and this place you see should be a shrine. That is why our shrine is at that site till date. We call the shrine Erosefe or Orhiara shrine.

On his part, Chief Christopher Okpowe, the Osibi of Orogun kingdom, while explaining the benefits of worshipping the monitor said, “the man called Orogun was a warrior and at a time of war when he was being chased at the battlefield by his enemies, he got to a river and there was no way to cross. It was there the gods of the land came up through the monitor. The monitors formed a bridge across the river and the Orogun children started walking on the monitors until they all finally crossed. When the enemies got to the river, the monitors disentangled, so the enemies could not cross to chase the Orogun children any longer, since that time till date we don’t eat monitors, if you do, your skin will be like that of the monitor, unless you go and appease the gods, even if you go to the best hospitals in the world, it will not work. You must surely die". The benefits of forbidding the monitor in modern day are enormous. "The communication between the orogun people and the shrine called Erosefe is the monitor, because when it appeared, the Erosefe itself decorated itself with the monitor. Apart from the war aspect, if an Orogun man is travelling, if anything bad wants to happen, the monitor will appear. If you are driving, once you see it, you have to wait for some few minutes, the monitor will again walk past the road you are travelling on, and that signifies that there is danger ahead. It will make the person to be more careful, the dog on it's part serves like an errand boy to us, the moment it senses any danger, it will pass the information to us, any Orogun indigene that eats these animals without appeasing the gods must surely die" - he said.

Also, on the shrine:  The "Erosefe" itself is not a man-made image, it appears on its own. If we go there now, you will not see anything, it is only the ordinary ground you will see but when it is the festival period, it will be happy, so the ordinary ground will rise like a mountain. Believe me or not, this is the symbolic part that makes us to respect and worship it. If it were man made, it could have gone out of the kingdom long ago.” as said by an elder in the Orogun community. If the monitor is mistakenly killed by an indigene or foreigner, he/she is made to buy the dead animal by any amount stated by the community and is also made to bury the monitor according to traditional rites, accompanied by appeasement to the gods of the land to wave off evil to the offender.

The monitor are in there numbers in the community due to the fact that they are not being hunted down as a source of food, as it is forbidden to kill them. It has become a common practice for the monitor to walk into kitchens and eat food prepared for one's self or the home, lie on the road, causing traffic amongst other intriguing activities. There reasons for worshipping and placing a "touch not tag" on the monitor may be looked at as archaic and outright mundane, but fact is, the Orogun people believe in its potency to protect and save them from impending danger.

What Is Africa’s Place In The Evolving Space Technology? J