Bombino, The First Nigerien Artist To Be Nominated For A Grammy

The electrifying musician talks about wielding the Tuareg weapon of peace: a guitar. Omara “Bombino” Moctar, 38, is the Nigerien guitarist who has recently been nominated for a grammy. His electrifying, acoustic sound and Tamasheq lyrics that touch on his Tuareg heritage and connection with the desert have become a hit. His music is boundless. It is comprised of traditional Berber sounds, the blues, rock & roll and reggae. What is just as unique as the above is his story. 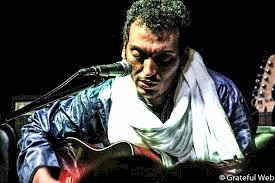 His people, the Tuareg, descendants of the Berbers of North Africa have long been nomads, traders and warriors within the Sahara Desert.

In his early years, Bombino grew up in an encampment in Agadez with his seventeen brothers and sisters and rebelliously refused to go to school. He would attend a French-Arabic school until the age of nine then leave and be taken in by his grandmother, who would instill in him Tuareg moral code.

In 1984, when a drought decimated their livestock and forced the Tuareg of Niger and Mali to migrate to Algeria and Libya. They fought against governments that failed to notice them. Artists pushed the agenda of the rebellion through music. Tuareg musicians sang songs that affirmed the importance of heritage and the upholding of rights. It was from this school of thought that Bombino’s love of music came to be.

In 1990, when the Tuareg started their first rebellion, they were declared enemies of state and exiled. Bombino’s family fled to Algeria. While there, he was visited by relatives with guitars they left behind. Curious, Bombino took a guitar and began to strum.

When tensions cooled, Bombino and his family would return to Agadez. Bombino would be gifted a guitar and even join the Tuareg political party. Under the tutelage of the party’s guitarist, a young and small Bombino would make quite the name for himself.

Bombino would grow as a musician and perform a number of places to the dismay of his father. He would even befriend other musicians like him on journeys to Algeria and Libya. His guitar was never too far away. While tending to animals as a shepherd, Bombino practiced. He studied the videos of Jimi Hendrix in an effort to perfect his craft. Demand for him grew.

He would eventually record his first album and become highly requested on Agadez radio.

In 2007, a second Tuareg rebellion took the lives of more civilians and livestock, so Bombino fled to Burkina Faso. While there, the man would meet filmmaker Ron Wyman who would both film him for a documentary and take him to Cambridge to record an album. This album would be the beginning of international acclaim.

When the Tuaregs stopped fighting, Bombino performed and celebrated in Agadez, at a concert for peace before a large crowd.

Bombino would tour the world and continue to record. His album, Nomad (2013) would debut at #1 on the Billboard World Music album chart and iTunes World chart. His next album Azel (2015) would feature his new genre, ‘Tuarreggae,’ a mix of Tuareg blues, reggae and rock. His most recent album, Deran (2018) was recorded in Morocco. It built on the artist’s need to make something wholly african and be as expressive as possible. It, evidently, topped charts and landed him features in the New York Times, Noisey and the Guardian.

Today, Bombino travels far and wide speaking about his culture and the importance of peace and education. He does so wielding a guitar.

Responsible Tourism: What Does It Actually Mean?