Cheese for the goose, pizza for the gander: Understudying gender discrimination in world football.

Unveiling the obvious corruption and biased treatment in world football between genders. 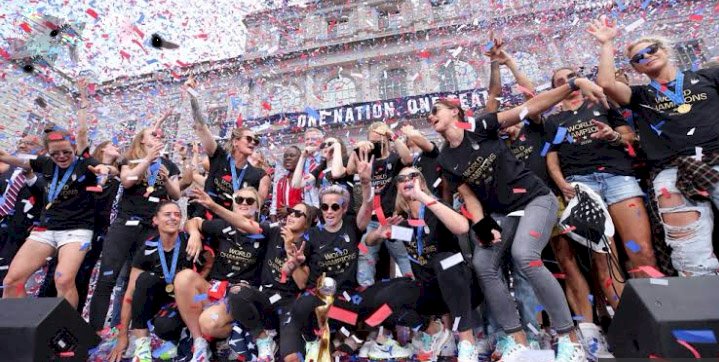 The 2019 female world cup has just ended producing the United States women national team as champions and it was a thoroughly deserved feat characterized by rigorous training and preparation, travel lags, injuries that must have caused some of the players a certain amount of physical and mental stress amongst a host of other hazard that comes with it but while the fans basked in the euphoria of that hard earned victory, it wasn’t time for the players to enjoy their glory as they assumed almost immediately on the same pitch where they had just overcame the final hurdle towards the trophy, the role of advocates for gender equality in the world of football.

The fans were also solidly behind them as placards of “equal pay” came up in the stands with equivalent chants of same while a more fervent section took to booing the members of the football governing body present at the award giving ceremony. The grouse was that the female footballers have always been treated with something akin to disdain and a blend of resentment and disrespect compared to their male counterpart on all levels ranging from amount paid as prize for winning the much coveted world cup trophy to the bonus given to teams according to what stages of qualification made, as well as money paid to the football federation of participating countries prior to the commencement of the competition which is to be used in covering preparations. The inequality wasn’t just with the international federation of association football but also immersed in how footballing nations treat their male footballers as against the female footballers.

In the just concluded female world cup in France which ended July 7thprecisely, the USWNT got 4 million USD for placing first at the competition and they got approximately 467,000 USD as their own share of the 11,500,000 USD allocated by FIFA to be shared by the 24 participating countries. This seems like a lot of money until compared to the 38 million USD bagged by the French national team for winning the Russia, 2018 men world cup as well as the 1.5 million USD for preparation for the competition like the remaining 31 teams that participated.

Using the USWNT as a case study for various reasons, the most important being that they are the most successful female team in the footballing world winning four women’s world cup title, four Olympic Gold cups and eight CONCACAF Gold cups. The team won a medal in every world cup and Olympic tournament in women’s soccer history between 1991 to 2015. If all these feats are not deserving of accolades then I bet the fact that they are a more successful team compared to their male national team, in fact their success stories should never be compared because the female stars has shone brightly where their male haven’t.

According to documents sourced from and obtained by the Guardian, the USWNT’s contract guarantees a player will receive 3,000 USD for every qualification game won and since they won all five each players got 15,000 USD, they also get 37,500 USD bonus for qualifying  for the world cup, another 37,500 USD for players who made the final list of the world cup squad and 110,000 USD if they win the cup which they did hence we can conclude that every member of the triumphant  USWNT got 200,000 USD each and while this might seem like a lot of money, the bias is heartbreaking when compared to the USMNT contract which allocate to each member of that team a sum of 108,695 if they  qualify for the last world cup which they didn’t and overall any member of that team could have made up to over 1.1 million USD for winning the men’s world cup.

However unlike in the case of FIFA where the excuse of how much the men’s football generates overwhelmingly more than the female football could have been tenable, the USWNT has actually generated more revenue for the United States as against the USMNT according to the wall street Journal which stated that from 2016 to 2018, the US women’s games has generated about 50.8 million USD in revenue compared with 49.9 million USD for men’s games.

It is a complex topic holistically looked but simple on the ground of an inherent propensity for gender discrimination in the world of football. What is good for the gander should in the least be good for the goose.

In defense of this disparity, FIFA president Gianni Infantino during a FIFA council held sometimes in October 2018 said there was a need to find the most balanced way to ensure equality of pay between genders.  He however went on to state that “ maybe one day women’s football will generate more than men’s football” which in the author’s opinion is a subtle way of saying there could never be equality in the amount paid to male and female footballers at any level.

Tanzania And Kenya: An Idyllic Setting For Nature And Wellness Retreats

Staying The Course Through Thick And Thin