Nigeria-China relationship was officially established on 10th February 1971. 2016 marked the 45th anniversary of the establishment of diplomatic ties between the two countries. In recent years, bilateral relations among nations have witnessed drive of rapid development with frequent exchanges at all levels and mutual political trust and bilateral economic benefits at hundreds of billions of dollars. Nigeria’s relations with China have grown in the last decades from the limited and recurrent contact that marked the immediate post-independence era to an increasingly complex and expansive engagement. 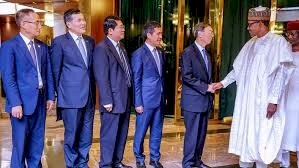 President Muhammadu Buhari says Nigeria is ready to provide counterpart funding on all agreements reached with China for the provision of infrastructure that directly improves the livelihood of Nigerians. The president stated this when he received Yang Jiechi, Special Envoy of the President of China, Xi Jinping, at State House, Abuja, on Thursday.

‘‘Now that we have a government in place (with the Ministers), we know the provision of infrastructure is very important. It (Infrastructure) provides job opportunities and economic sustainability which are very important for political stability,’’ he said.

The Nigerian leader also underlined Nigeria and China’s cooperation at the international arena.

He said: ‘‘At the international level, we appreciate the support we give to each other and very importantly this must be sustained.

‘‘Nigeria is determined to play its role wherever China’s interest is concerned.’’

On Lake Chad, the President emphasized the need for sustained support from China on the recharging of The Lake.

He noted that Nigeria and countries in the region have a lot to benefit from Chinese expertise and technology on inter-basin water transfer.

‘‘China has the technology, the people and the resources to help Lake Chad Basin countries because not many people in the region appreciate our problem of being near the Sahara desert and its influence on our population and  climate change, which is affecting over 20 million people living there,’’  President Buhari also welcomed the offer by the Special Envoy for close partnership between Nigeria’s governing party, the All Progressives Congress and the Communist Party of China.

Delivering the message of President Xi, the Special envoy, who led a high-powered Chinese delegation to the meeting, assured President Buhari of China’s readiness to improve strategic partnership with Nigeria.

He also assured that China would effectively implement the outcomes of the Forum on China-Africa Cooperation (FOCAC) Beijing Summit in 2018.

‘‘During Your Excellency’s trip to China for the FOCAC Beijing Summit, we had bilateral meetings and reached important agreements on our bilateral relations and issues of mutual interest.

‘‘I highly value China’s ties with Nigeria and stand ready to work with Your Excellency to enhance our political trust, jointly pursue Belt and Road Cooperation, effectively implement the outcomes of FOCAC and strengthen our coordination in regional and international affairs so as to further enrich the strategic partnership between both countries,’’ President Xi said.

The Chinese leader once again congratulated President Buhari on his re-election.

Mr Femi Adesina, the Special Adviser to the President on Media and Publicity, in a statement, said President Buhari presided over the bilateral meeting and with the Ministers of Finance, Budget and National Planning, Power, Transport, Aviation, Industry, Trade and Investment and Foreign Affairs in attendance.

“The meeting discussed the status and implementation of several on-going projects being undertaken by Chinese firms in the country including railways, free trade zones, Mambilla Hydro-Power plant and four airport terminals, among others,’’ he said.

The Republic of China is in East Asia. It has a total area of 9,571,300 square kilometres with the world largest population of above 1.3 billion

people. While Nigeria, is the most populous country in Africa with over 200 million people and a rapidly growing population, Oji-Okoro (2014). The first phase of Chinese engagement with Africa in general began during the Bandung Conference of non-aligned in 1955. There was a substantial

improvement in the relationship towards the end of 1950s as a result its worsening ties with the Soviet Union. China then was looking for allies in Africa to establish counter balance weight to soviet hegemony and western imperialism, Konings (2007). China’s recent economic interests and investments in Nigeria have put its bilateral relations with Nigeria under scrutiny. As a fact, impacts of Chinese economic activities are being felt in many parts of Africa in general and Nigeria in particular. The areas of impacts include Foreign Direct Investment (FDI), funding for infrastructural development and increasing the prices of Nigerian commodity products and introduction of low-price electronic and telecom hardware products, Haros (2011).

China’s emergence in Nigeria has been of interest to many. Its re-emergence is seen as a combination of optimism, concern and puzzlement. There is intense debate generally by this re-emergence which centered on two core issues; what motivates the present engagement and what are its implications for Nigeria’s development? However, many have argued that the engagement is apparently meant to repeat what western countries did decades ago when they exploited Nigeria’s resources and governed same. This had led to many questions whether China is a new colonizer, an exploiter or a partner in development. While there is no one-tone way to disparage this, the fact remains that China sees African continent and Nigeria in particular as a new investment frontier and politically. China is keen on exploring the opportunities the continent presents and prepared to continue giving development assistance to African countries.

Nigeria-China relationship was officially established on 10th February 1971. 2016 marked the 45th anniversary of the establishment of diplomatic ties between the two countries. In recent years, bilateral relations among nations have witnessed drive of rapid development with frequent exchanges at all levels and mutual political trust and bilateral economic benefits at hundreds of billions of dollars. Nigeria’s relations with China have grown in the last decades from the limited and recurrent contact that marked the immediate post-independence era to an increasingly complex and expansive engagement. While, like most other African countries in the 1960s and 70s, Nigeria viewed China as a nonaligned developing country, it did little to foster business or even special diplomatic relations with the Asian giant. Nigeria’s traditional development partners were mainly from Europe and the America (U.S. A. and Canada). These groups have dominated the flow of trade, investment (in terms of foreign direct investment-FDI), grants and financial as well as technical aid to the country

The relationship between the two countries had grown closer as a result of international isolation and condemnation of Nigeria's military regimes 1970-1998. While on the other hand, the Chinese open door policy embarked by the communist party in 1978 led by Deng Xiaoping which gives equal commercial and industrial rights to all the nationals also precipitated or hastened the economic relations between the two countries. These cooperative relations which seem to be enjoying a rapid progress are based on the principles of equality, respect and mutual benefit, with the friendship and exchanges of visits between the two countries consolidated with the time. Under the framework of the Forum on China-Africa Cooperation known as FOCAC which started in 2000, more importantly with the follow-up actions of the distinction. International Journal of Social Sciences and Management Research Vol. 4 No. 9 2018 ISSN: 2545-5303 www.iiardpub.org