A LOOK AT THE IGBE BELIEF SYSTEM AND MODE OF WORSHIP. IGBE, known to the then British colonial officers as the "white chalk juju movement" is a monotheistic traditional religious system, practised by the URHOBO people of southern NIGERIA. 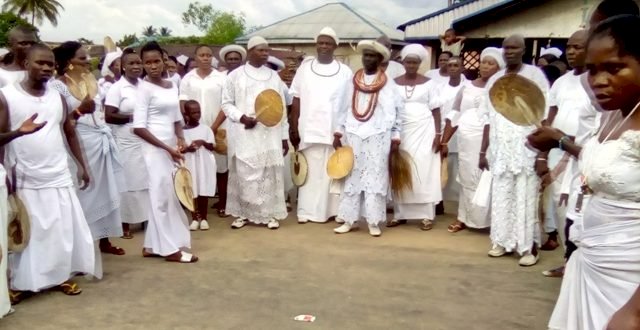 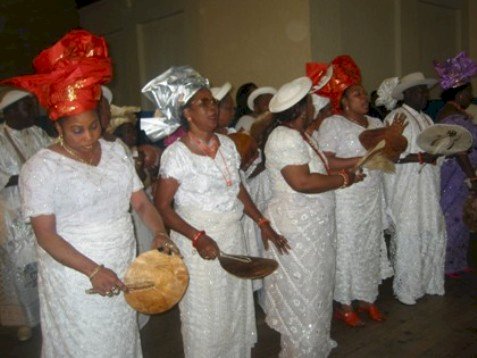 Founded in 1858 by Ubiesha Etarakpo in kokori, Delta state NIGERIA, who was believed to be a mystic. He allegedly saw two divine beings who anointed him, and gave him a white piece of chalk "orhen" obtained from the earth, telling him to preach against witchcraft and immorality.

Ubiesha was said to have used this "orhen" in curing several illnesses. The traditional religious movement is believed to be in the service of "oghene" the supreme divine being. IGBE in URHOBO (an indigenous language of the Delta people of Nigeria) means dance, the religion itself been centred on dancing, as adherents dance as an act of worship. While dancing, worshippers are subdued, as a state of ecstasy is attained with the aid of emotional songs. The IGBE belief system has wildly been regarded as pagan, no thanks to the numerous influences and additions to the original teachings and motives, largely due to the formation of different sects as the movement spread far across URHOBO land and beyond.

On close analysis of the founding belief system, there really are no features of idolatry, no symbols or images, except leather fans, used in worship, and white (also native) chalk, conoting purity and also used in the healing process. Adherents believe the IGBE religion is a revealed belief system. Members in certain sects enter the "ogwa" the place of worship, bare footed and kiss the earth with the head three times while kneeling.

The "Edigbe" meaning the day of joy, is known as the holy sacred day, when adherents come together to worship. Similar to Sunday for Christian faithfuls.

The IGBE celebrate an annual feast known as the "ore isi" for twelve days, taking place every may. Their mode of dressing signifies purity, as adherents and the priests put on white clothing apparel, scarfs, head gears and regalia respectively. Their necks are also powdered in white, URHOBO songs are sang in place of hymns.

The IGBE religion has also had its fair share of criticisms, ranging from adherents rejection of conventional medical treatment, as members believe in administering the native chalk as a means of treatment for all ailments. Which has been viewed as dangerous, also it has been criticised as a religion of idol worship, rightly so; due to influx of various practices negating from the founding believe. Now there are accusations of witchcraft, mermaid worship, and believe/worship of ancestral spirits. Little wonder it has become un-popular and viewed as evil, also with the wide spread of Christianity in NIGERIA, the IGBE belief system "became a religion of idolatry" as the Christian faith sees other believe system as "not worship of the true God YAHWEH".

In earnest we can say, The IGBE belief system was a/is a religion with a sizeable amount of followers  by the indigenous people of southern Nigeria, though dwindling drastically as an effect of widespread Christianity, they still occupy a place in history of the religious practices of the Nigerian people both past and present.

5 Ways To Make Money From Your Music