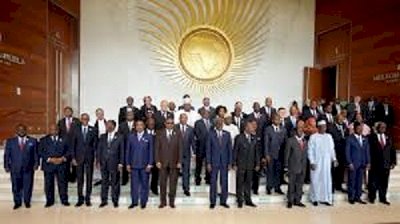 The discourse is on the possibility of a united states of Africa and 4 major factors were highlighted that can help necessitate that, which were mainly the Purpose for realizing one united Africa, leadership as one of the critical factors that can galvanize the states to a united front to achieving its goal, Economy which is a stimulus for the fabric of the continent’s growth and Small-scale cross-border trade which can play a fundamental role in contributing to poverty reduction and food security across Africa. In conclusion we look at the remaining 3 factors below:

Future African leaders should develop the strongest mix of skills that their educational opportunities permit. Creating change starts with analyzing problems, but you can’t stop there. To actually create change, we need young leaders who can combine their concern for the greater good with excellent, in-depth understanding of how to run a business or how to create and deploy new technology. We need leaders with courage who can think broadly and who excels at teamwork and communication. Fighting corruption is a hydra monster head that must be dealt with squarely starting from the leaders; they will require ethical courage to fight this monster which is inimical to the growth of any state or nation. Africa needs leaders who will do the right thing, even when no one is watching, and who will refuse to tolerate wrong-doing in others. But ethical courage cannot be imposed; it is fostered through an honest exploration of values.

The 2019 Africa Capacity Report (ACR 2019) is the seventh in the series and like those preceding it, measures the capacity of African countries to pursue their development agenda, focusing on key determinants of capacity for development. The theme for 2019 is “Fostering Transformative Leadership for Africa’s Development.” Leadership is critical to the continent’s Agenda 2063, a home-grown strategic framework for socioeconomic transformation by 2063, and to the internationally agreed Sustainable Development Goals. The ACR 2019 defines transformative leadership as leadership that brings about positive radical changes. In a development context, it is leadership that engenders widespread, demonstrable improvements in peoples’ lives as evidenced by rising incomes, longer life expectancies, comprehensive social safety networks, and universal access to basic services. In this regard, transformative leadership requires developing and persuasively communicating an agenda for long-term success, fostering supportive institutions, and creating short-term opportunities as an additional incentive. ACR 2019 addresses the capacity dimensions of transformative leadership. It looks at the major elements of transformative leadership in Africa, highlights the leadership capacity gaps related to achieving sustainable development on the continent, and identifies strategies for addressing them.
Economy

Macroeconomic stability is equally important. During the 1980s, Africa lost a decade in terms of economic growth partly due to the absence of prudent macroeconomic policies. High and volatile inflation rates, unsustainable budget deficits and balance of payments crisis characterized many countries on our continent during this period. Therefore, maintaining and further consolidating both political and economic stability would be an important ingredient in enhancing economic growth. Today education is widely recognized as an important contributor to economic growth because it leads to the creation of new knowledge and innovation. Not only is education important for economic growth, it is probably the most basic necessity after those that are vital to life itself, such as food, clothing and shelter. It is education that lifts people out of the state of poverty. The huge gaps in economic opportunities that we witness on the continent, is mainly as a result of lack of skills and knowledge. What we must, however, remember is that it is no longer enough to provide education as a social service. In today’s world where international boarders are fast crumbling, it is education that will distinguish winners from losers. As African countries, we have now to compete in the world market where competition is so fierce and only the fittest will survive. It is therefore critical that the education must be relevant and of high quality. 2 BIS Review 56/2007 Not only should the education be of high quality, but it must also be practical. The education must lead to a situation where we are able and ready to use the knowledge we have acquired and find ingenious ways of addressing the economic problems facing Africa. This means Africa must continue to invest in its human capital, while at the same time creating incentives to keep them on the continent.

Regional integration has been a subject of a menu of declarations in Africa for decades, and for good reason. Regional integration bears significant potential for Africa’s economic transformation and development through such outcomes as reduced trade costs, economies of scale and enhanced competitiveness. A lot of progress has been achieved in the area of regional integration, including trade, finance and infrastructure. For instance, the share of intra-African trade has increased appreciably over the last few decades, and Africa has begun witnessing the emergence of regional stock exchanges. However, Africa still has a long road to travel.

Sub-Saharan African economies have been inextricably linked for centuries. Traders, often belonging to the same ethnic group or family, have been regularly crossing what are now borders to exchange goods and services, giving rise to intense flows that account for a significant part of the continent’s total trade. Today, cross-border trade is a major feature of African economic and social landscapes: according to some estimates, it contributes to the income of about 43 percent of Africa’s entire population. Such trade supports livelihoods and creates employment, including for disadvantaged and marginalized groups. Cross-border trade is also dominated by agricultural and livestock products, and so is an essential part of food security in many places. Hence, overall such trade is essential for welfare and poverty reduction. Cross-border trade is especially important in fragile and conflict-affected states (FCS), as it allows vulnerable populations to reconnect with the world and access goods and services that are key for their economic and social recovery. In such environments, trade also helps generate solidarity between border communities, and thus critically contributes to promoting peace and stability.

For Africa to achieve its regional trade potential, governments need to do more to support small-scale trade, specifically:

Removing obstacles to regional trade integration in Africa would be particularly beneficial to the poor, as they carry most of the small-scale, cross-border commerce that happens within the continent. The potential benefits include better food security, faster job creation, more poverty reduction, and increase tax revenues for authorities and better long-term developmental outcomes.

To conclude there are some policy options that may be considered by African policymakers. As each African country may choose to embark on independent policies, the imperative for a continental approach to addressing the challenges is needed. Hence, Africa should continue its efforts to deepening the integration of the continent.

Bombino, The First Nigerien Artist To Be Nominated For A Grammy