Africa is one of the continents still with indigenous tribes who still maintain their cultures. These are two of the many inventions that have come to define our modern society. But, somewhere in remote areas and rich plains of Africa, there are groups of people who continue to live peacefully without dependence on any of the inventions the modern world values so dearly. These are the indigenous communities whose traditions, customs and way of life have astonishingly withstood the test of time and the sweeping force of modernization. 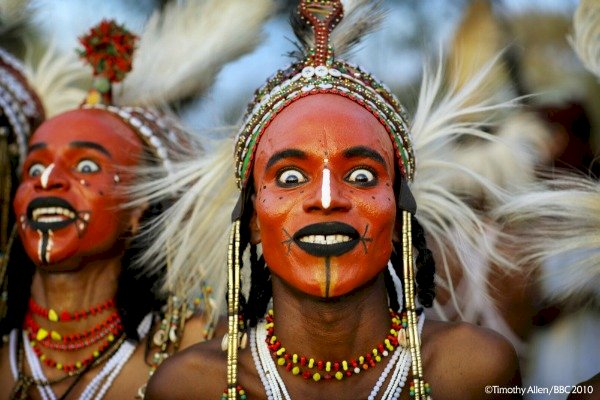 Meet some of the Africa’s indigenous  tribes who continue to live the way their ancestors did generations ago.

Since the 16th Century, the Himba have lived in the scattered settlements of Namibia’s Kunene Region, remaining true to their traditions and customs for centuries. There are approximately 30,000 to 50,000 members of this semi-nomadic group today.

Both men and women wear loincloths of soft leather. Himba women are famous for their unique hairstyles and they use “otjize” – a paste of red ochre, butter, and fat, which they smear on their hair and skin, making their bodies glow with beauty. From puberty, women braid their hair and start applying this paste all over their bodies, giving them a striking red hue. While “otjize” protects their skin from the sun, this tradition is essentially done for aesthetic reasons.

The Himba are a religious people who believe in a god called Mukuru. They communicate with their god through the “okuruwo,” or the holy fire, which is constantly kept alight in their villages. They believe the holy fire links them with their ancestors, who act as intermediaries between the people and their god.

The Dogon people of Mali have a rich history and are believed to be descendants of ancient Egyptians. They are renowned for their astronomical knowledge and wisdom dating back to 3200 B.C. Astonishingly, the Dogon knew about Sirius, the brightest star in the sky, and its three-star system (Sirius A, Sirius B, and Sirius C) long before scientists began contemplating the star’s existence. They knew that Sirius B was invisible to the naked eye and that it has a 50-year orbital period.

It remains a mystery how this intelligent tribe possesses such astounding astronomical wisdom. This is a quality they shared with the Ancient Egyptians, who also had knowledge about Sirius, and considered this star system an important part of their origins as they believed that’s where some of their gods came from.

The Dogon are also famous for their mask dances, wooden sculptures, and architecture. Their art is centered around religious values and ideals. Like many African societies, the Dogon are agriculturalists, cultivating millet, sorghum, and rice, as well as peanuts, onions, and tobacco. Today, there are approximately between 400,000 and 800,000 Dogon people in Mali.

The Turkana are a nomadic pastoralist group that inhabits Kenya’s Turkana District. With a population of about 350,000, they belong to a bigger group of Nilotic tribes together with the Maasai and Samburu. The Turkana are remarkable survivors who live in the wickedly dry region of Northwest Kenya, where temperatures can soar as high as 45 degrees Celsius (113 degrees Fahrenheit).

The group’s history can be traced back to Uganda when they migrated to neighbouring Kenya about 400 years ago. Just like with other indigenous tribes in Kenya, the Turkana place high value on cattle, a symbol of wealth, and an important source of food. Animal fat is used for food and medicine.

The Turkana have remarkably preserved their traditional religious beliefs for centuries. They believe in a god called Akuj, who is addressed through prayer or via an intermediary.

With an estimated population of 1,000 to 2,000, the Karo Tribe makes up some of the smallest indigenous groups left in Africa. The ethnic group occupies the Lower Omo Valley in Southern Ethiopia along with a slew of other tribes.

The Karo continue to practice several traditional customs that were practiced by their ancestors centuries ago. One such tradition is the culture of body art, which has become an intrinsic part of the group’s identity. The Karo paint their bodies with a mixture of white chalk, yellow mineral rock, iron ore, and charcoal to express beauty.

In another symbolic custom, the Ethiopian ethnic group also practices body scarification, a tradition done to express cultural identity and community status. Both women and men scar their bodies, but for different reasons. Women wear beautiful patterns of scars on their chests, stomachs, or backs to signify maturity and beauty. Men scarify themselves to symbolise courageous acts, such as defeating an enemy from a rival tribe or bravely killing a dangerous animal. Scarified men enjoy a high level of respect in the Karo community.

Believed to have migrated from Ethiopia in the 1600s, the Karamojong have inhabited the Northeastern Region of Uganda for centuries. They have Nilotic roots, and their language has traces of Nilo-Saharan Kalenjin, the common class of languages spoken by ethnic peoples in Uganda, South Sudan, and Kenya.

The semi-nomadic Karamojong group takes pride in its rich cultural heritage, avoiding modern clothes in favour of the tribe’s traditional clothing that consists of a blanket-like shawl, which usually comes in red and black. The women also wear elaborate beads and necklaces.

In line with keeping their cultural practices untainted by the modern world, the Karamojong have kept their religious beliefs pure. They still worship their god, Akuj, and believe that all their cattle were given to them by their god. Like the Maasai of Kenya and Tanzania, the Karamojong have a deep connection with cattle and have a culture of cattle raiding.

The Maasai are, arguably, the most famous and storied African indigenous group. They have appeared in countless magazines all over the world, and are the subject of a plethora of documentaries. Their distinct culture, traditions, and dress have long endeared them to the world and made them a tourist magnet.

The tribe of fierce warriors reportedly migrated from Sudan in the 15th Century, settling in Kenya and Tanzania along the Great Rift Valley. There are an estimated 840,000 Maasai people in Kenya and 380,000 in Tanzania today. They live in huts in small villages, where each homestead stands surrounded by a fence made of thorns. The group’s entire way of life has historically revolved around their cattle, which they believe were given to them by their god, Ngai. Being the most valuable thing they own, the cattle provide food and are also a form of currency and wealth.

The Maasai’s traditional dress is as fascinating as their way of life. Men are known for their red “shuka” or robes, while women dazzle in their red garments known as ”kanga,” traditionally complemented with elaborate, colourful beads and necklaces. The red colour is a symbol of chivalry and bravery in the Maasai Community.

The African Rainforest is home to a group of peoples known as the “Pygmies.” While the term ‘Pygmy’ used to be derogatory, it has been reclaimed by the group as a term of identity. This ethnic group consists of distinct indistinguishable tribes who live in the rainforests throughout Central Africa and have an intimate connection to the forests. The group consists of the Mbuti (Democratic Republic of Congo), Aka (Central African Republic), Baka (Southern Cameroon), as well as the Twa (Rwanda). These tribes collectively account for an estimated 130,000 to 170,000 forest dwellers.

An essential part of these indigenous groups’ identity is the forest, which they have lived in for centuries. Not only is the forest their traditional home, but it’s also a source of their religion and livelihood. Before their lives were disrupted by displacement and discrimination, the Pygmies lived a happy nomadic lifestyle, moving to new parts of the forest several times a year.

The Tuareg live in the Sahara, and their population is spread across several countries, including Niger, Algeria, Libya, and Mali. They are nomadic pastoralists, moving from one place to another with their herds of camel, cattle, and goats.

The tribe practices Islam, with unique customs that differ from the mainstream wing of the religion. In many Muslim societies, women traditionally wear a hijab, but when it comes to the Tuareg, the veil is worn only by men. They begin wearing it at the age of 25, signifying adulthood and preparedness for marriage. The first veiling is performed by a “Marabout,” or religious leader, who wraps the veil around the young man’s head.

While the Tuareg read Arabic and speak Hausa, the group’s main language is Tamasheq, which falls under the Berber language group, one of the oldest languages in the world.

One of Africa’s ethnic groups with unique cultural practices is the Wodaabe Tribe of Niger and Chad. They are nomadic cattle herders found in the Sahel, a semi-arid region in the south of the Sahara Desert that spreads across several countries from the West to the East of Africa.

The Wodaabe are known for their tradition of Gerewol, a prestigious festival that finds men competing for love. They paint their faces in bright colours, wear colourful, elaborate clothing, and perform a series of dance routines to attract women. The dances, which go on for hours, are performed in front of female judges who choose the men they find the most beautiful. To Wodaabe women, an attractive man is one who is tall, has white and regular teeth, as well as a symmetrical face.

The Wodaabe speak the Fula language and are a subgroup of the Fulani people, who are spread across West Africa. “Wodaabe” means “people of the taboo,” which is believed to be a reference to the tribe’s separation from the main Fulani culture.

7 Things New Leaders Need To Do To Fix South Africa